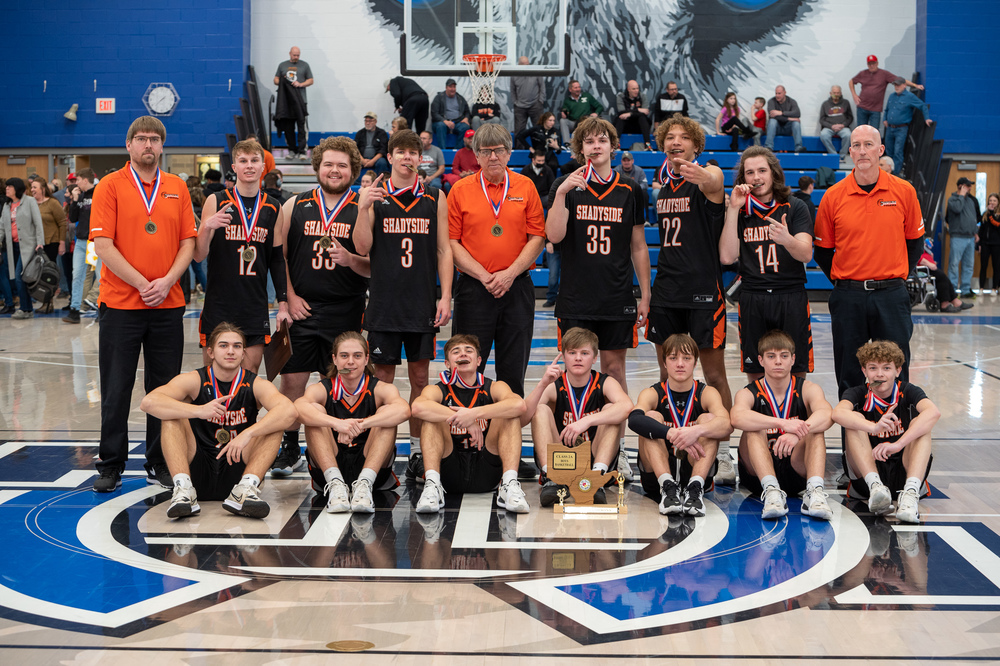 Off the opening tip, Mason VanNest took an elbow to the face which would send him back to the locker room until the second quarter.  Without VanNest commanding the point and helping out on defense, the Tigers found themselves trailing 17-6 after the first.  Wheeling Central’s Ryan Reasbeck scored 11 of his 23 in the first quarter.  When VanNest emerged from the locker room, the Shadyside faithful gave a nice ovation to welcome back their point guard.  Despite the slow start the Tigers were able to crawl back to within eight at halftime.

Coming out of the break, Shadyside was down 30-22.  A huge 22 point third quarter helped Shadyside get within two.  Luke Bell knocked down two clutch threes in the second half.  His first was with two minutes left in the third.  On the following possession, Korey Beckett cooked Ryan Reasbeck and knocked down a triple.  Reasbeck followed Beckett’s nice move with a three of his own.  An intense late third quarter was just a preview of what was in store for the fourth and final quarter.

Just over a minute into the fourth quarter, Mason VanNest fouled out.  He was just one of many Tigers to find themselves in foul trouble throughout the game but luckily he was the lone Tiger to foul out.  Bell hit his second three with 6:15 to go and that tied the game at 49.  Karl Tsoras was fouled and went to the line with 5:10 left.  He missed both free throws but a rebound by Bell got the ball back for the Tigers.  Following great ball movement off the offensive rebound, Beckett was fouled.  He nailed both foul shots giving Shadyside a 51-50 lead.  The Knights found themselves struggling down the stretch.  Over a roughly three minute span they had come away with zero points.  With the clock winding down in a close game the Knights were forced to foul and the Tigers continuously knocked down their free throws which helped them pull away and win the OVAC title 62-54.

Korey Beckett won player of the game.  He finished with 19 points, three rebounds, four assists and a pair of steals.  Bryce Amos tallied 14 points to go along with five boards, a block and four assists.  Elijah Brock netted 12 and was a rebound shy of a double-double.  With VanNest playing essentially just two quarters, he managed to score seven points and grab three rebounds.  Ben Wach struggled to score the ball, going just 1-7 from the field but shot 66% from the line.  Wach ended with four points but got five rebounds and stole the ball off the Maroon Knights three times.

As for Wheeling Central, Ryan Reasbeck went for a double-double.  He scored 23 points and grabbed 10 rebounds but also had an assist and four steals.  Quinton Burlenski scored 15 and Caleb Ratcliffe had 11.  Ratcliffe also had four rebounds and four assists.  Shadyside was able to keep the Toepfer trio in check, allowing just five points between the three of them; two for Michael and three for Leyton.  Even more impressive, all five points were from foul shots.  The Tigers locked the Toepfers down and that made a huge difference compared to the last couple meetings between these two teams.

Here’s what’s coming up for your Tigers.  Shadyside takes the court tonight at Shenandoah with JV starting at 6.  Then on Friday, they head to Morristown to take on the Union Local Jets.  JV starts at 6 on Friday as well, with varsity following soon after.  OHSAA tournament play started yesterday and Shadyside is seeded 7th in the East District of Division 4.  They have a first round bye and will either host the Shenandoah Zeps or travel to Hannibal to take on the River Pilots on January 25.  River and Shenandoah square off next Tuesday.  Good luck in the playoffs boys!