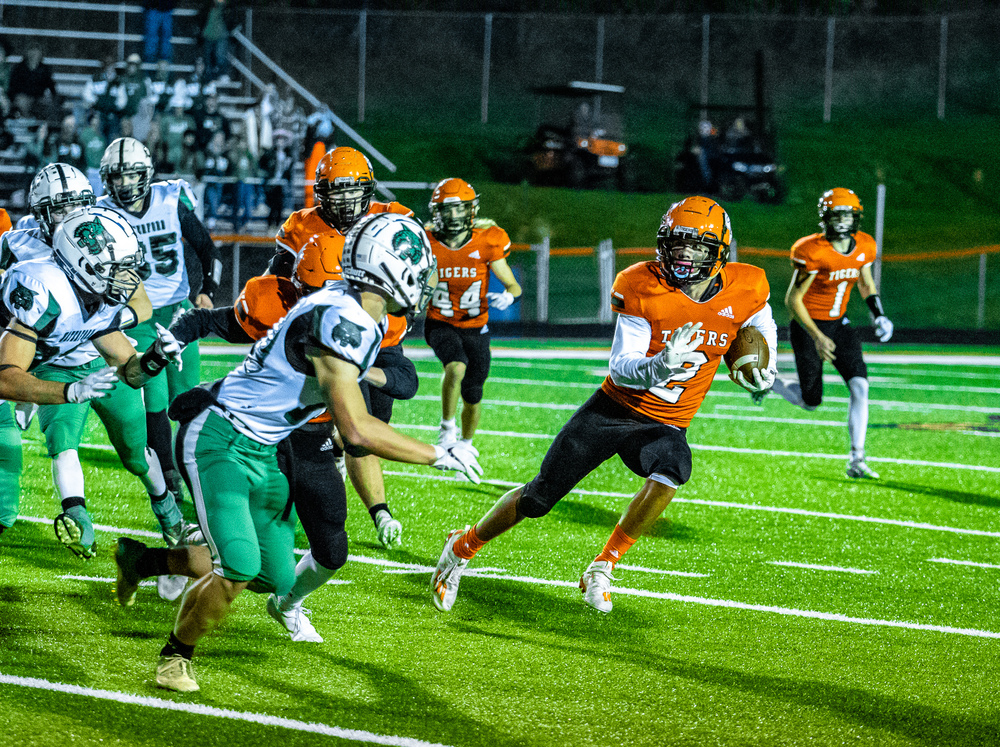 The Tigers headed into their round two matchup with a lot of momentum after defeating Fairfield Christian Academy 38-9 the week before.  After a hard-fought 48 minutes, the Tigers came out on top with a 27-13 win.  Both Waterford and Shadyside were run reliant all season long and that was no different Saturday night.

Waterford struck first on a 61 yard touchdown run by Holden Dailey.  After a missed extra point, the Wildcats were up 6-0 and they carried that lead into the second quarter.  This is when Wyatt Reiman decided to put the team on his back yet again.  He ran for a total of four touchdowns on the night, two of which came in the second quarter.  The Tigers would take the one score lead into halftime.  The third quarter started just the way the second had ended, with Reiman running the rock into the endzone.  His two point conversion attempt was a success and the Tigers took a commanding 20-6 lead into the final 12 minutes.  Dailey and Reiman would each run for one more touchdown in this battle of the backs.  Reiman’s final touchdown came with just under two minutes to go in the fourth quarter and would help to seal the deal for the Tigers.

Sophomore quarterback, Ben Wach, went down with an injury in the first half.  This forced the Tigers to look to their third string quarterback Korey Beckett.  Beckett entered the game and went 5-9 with 35 yards and two interceptions.  Beckett also ran the ball three times and totalled 18 yards.  Reiman had three receptions for 12 yards.  Andrew Osman and Mason VanNest each caught one pass, Osman’s went for 12 yards and VanNest’s for 11.  While the passing game may not have been there for Shadyside, the run game sure was.  Reiman finished the game with 28 attempts and managed to accrue 110 yards with four touchdowns.  Before exiting the game, Ben Wach had one rush for six yards.  Osman had three rushes for three yards and VanNest also ran the ball once.  He was unable to get any yards.  VanNest wasn’t much help offensively but his defensive efforts helped the Tigers secure the victory.

The defense was stellar once again.  Wyatt Reiman and Ryan Florence were all over the field making plays.  They lead the team in solo tackles this week with four a piece.  They also both had one tackle for loss.  Grant Miller, Mason VanNest, Andrew Osman and Kris Tsoras all also had a tackle for loss.  Florence may have only had one sack Saturday night, but his presence was felt in the backfield all night long.  It seemed as if he was applying pressure on every play.  Andrew Brown was able to get through Waterford’s front line and sack their quarterback.  Elijah Brock was another Tiger defender that got involved against the Wildcats.  He had three tackles, one assisted tackle and also had an interception.  VanNest was able to force a fumble which was recovered by Reiman.

The Tigers hope to continue their defensive tear and also look to catch up in the passing game this week against River.  The last time the two faced off was in week six where the Tigers barely escaped in a 14-12 win.  The OHSAA playoff round three matchup is set for a 7:00 p.m. kickoff at Purple Rider Stadium in Martins Ferry this Saturday.