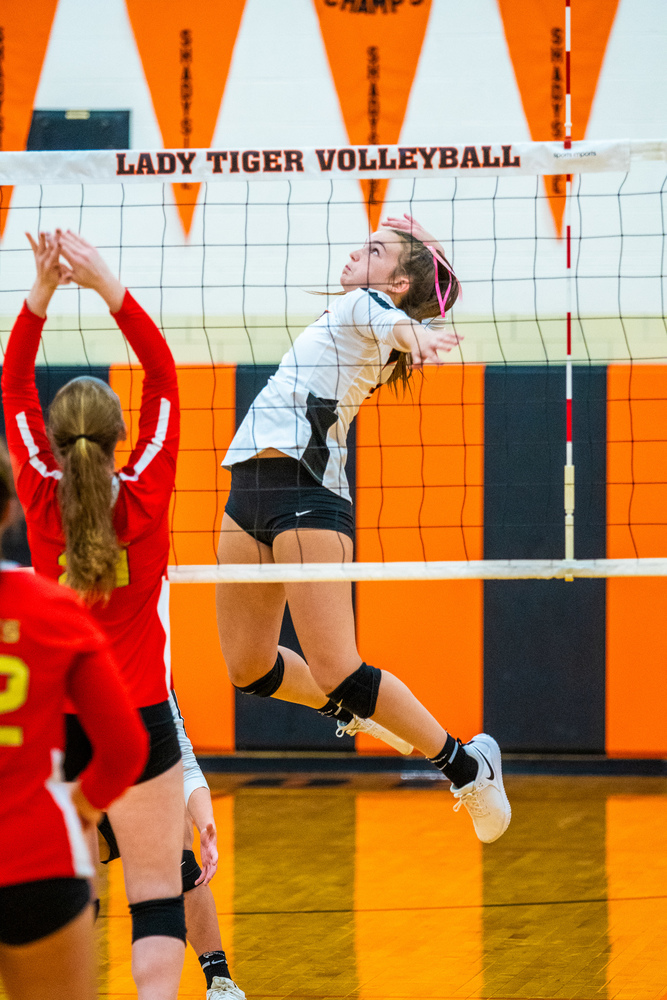 Coming off their second OVAC Championship in as many years, the Lady Tiger Volleyball Team took on St. John and Monroe Central in Sectional Tournament play this week.

In the sectional semi final matchup, the second seeded Tigers drew St. John Academy for the first round played this past Monday night.  Still playing like Saturday's OVAC Championship, the LT's made quick work of the Irish.  All told, the Tigers would surrender only 15 total points over the three set sweep.  For the match, Caroline Mercer led the way with 13 assists, while junior Gentry Brown led with seven kills.  Bayleigh Harman, Kayla Kryah, and Mady Violet led the game in aces as they evenly split 24 total for Coach Mercer's squad.  "We tried working on some stuff against (St. John)," Violet said of the win.

The Sectional final saw the Tigers welcome Monroe Central back to town for a third meeting on the year. During the regular season, the two teams split, each winning at the others home court. The first set saw the Shadeans firing on all cylinders, winning 25-18 over the visitors.  While the second set was closer, it finished just as the first, with the LT's winning, this time 25-22.  Up 2-0 heading into the third set, the Seminoles would get back to form to force a fourth, winning 25-20. However, that would be all the Tigers could stand as they went back to work.  Leading the entire way, the LT's would take the set, and the match with a score of 25-19. The win gave the LT's their fourth sectional title in a row and third for Coach Eric Mercer. For the match, the girls were led in kills and digs by Gentry Brown, who had 23 and 12 respectively.  They were also again led by Caroline Mercer in assists as she finished with 38 on the night.  Senior Paige Gorby added in eight kills and eleven assists as well. "We played very good against Monroe Central and the energy has been up since we won OVAC's," said Brown, "we plan to get in the gym and practice hard for Strasburg and bring the same energy to the court."

The LT's will be back in action next Wednesday night as they take on the Strasburg Tigers, who defeated Caldwell in five sets to earn a district semi-final birth.  The game will be played at Harrison Central at 6:00 PM.  Tickets must be purchased online at OHSAA.org